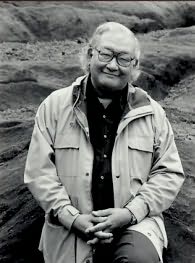 (b.1934)
N. Scott Momaday's baritone voice booms from any stage. The listener, whether at the United Nations in New York City or next to the radio at home, is transported through time, known as 'kairos"and space to Oklahoma near Carnegie, to the "sacred, red earth" of Momaday's tribe.

Born Feb. 27, 1934, Momaday's most famous book remains 1969's House Made of Dawn, the story of a Pueblo boy torn between the modern and traditional worlds, for which he won a Pulitzer Prize and was honored by his tribe. He is a member of the Kiowa Gourd Dance Society. He is also a Regents Professor of Humanities at the University of Arizona, and has published other novels, memoir, plays and poetry. He's been called the dean of American Indian writers, and he has influenced other contemporary Native American writers from Paula Gunn Allen to Louise Erdrich.

Momaday views his writings, published in various books over the years, as one continuous story. Influences on his writing include literature of America and Europe and the stories of the Kiowa and other tribal peoples.

I Knew You'd Be Lovely (2011)
Alethea Black
"When I came to the end I wanted to read the next page - or write it - but then I realized that there was no more to be said; as in the Navajo prayer, 'In beauty it is finished.'"
Visitors to this page also looked at these authors
Louise Erdrich
Leslie Marmon Silko
Rachel Joyce
Sherman Alexie
Deborah Moggach
James Welch
Bill Brewer
David Treuer
Nicole Mones
Tom Shone
James Reasoner
Nella Bielski
Leigh Russell
Tommy Orange
Kristin Fields
Karen Brooks