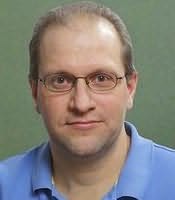 Scott Pearson was first published in 1987 with "The Mailbox," a short story about an elderly farming couple. In the decades since, he has published humor, poetry, short stories, reviews, and nonfiction. Two of his most recent publications are "Clothes Make the Man" in Writes of Spring and "The Tale of the Nouveau Templar" in ReDeus: Divine Tales.

Scott makes his living as a freelance writer and editor. He has edited such books as Tales from a Tin Can: The USS Dale from Pearl Harbor to Tokyo Bay, which received a starred review in Publishers Weekly, and Will to Murder: The True Story Behind the Crimes & Trials Surrounding the Glensheen Killings, which was featured on Dominick Dunne's Power, Privilege, and Justice series on Court TV.

Scott lives near the mighty Mississippi River,
in personable St. Paul, Minnesota, with his wife, Sandra, and daughter, Ella.

Genres: Science Fiction
Series
Kate Sullivan Mystery
Of Murder and Minidonuts (2015)
Out of the Jacuzzi, Into the Sauna (2015)

Collections
Clothes Make the Man and Other Crimes (2016)

Novellas
The Squid that Came to Phil's Basement (2016)