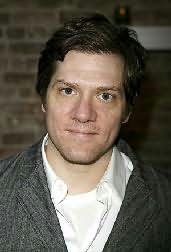 (b.1968)
Adam Rapp is an American novelist, playwright, screenwriter and filmmaker. He is currently the playwright-in-residence at Edge Theatre Company.

The son of Mary Lee and Douglas Rapp, he was raised in Joliet, Illinois, with his brother, actor Anthony Rapp, and sister, Anne. His parents divorced when Rapp was five, and he and his siblings were raised by their mother, who died in 1997. He graduated from Clarke College in Dubuque, Iowa, where he played varsity basketball, and completed a two-year playwriting fellowship at Juilliard.

Rapp directed his first film, Winter Passing with Zooey Deschanel and Will Ferrell in 2005, and was a creative consultant for the television show The L Word.