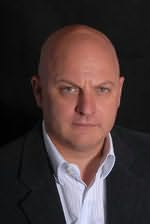 Anthony Riches began his lifelong interest in war and soldiers when he first heard his father's stories about World War II. This led to a degree in Military Studies at Manchester University. He began writing the story that would become Wounds of Honour after a visit to Housesteads in 1996. He lives in Hertfordshire with his wife and three children.

Hawk Quest (2012)
Robert Lyndon
"An 11th-century epic with action to equal the best of Bernard Cornwell. THIS is writing."

The Child of Vengeance (2013)
(Samurai, book 1)
David Kirk
"The book I've been waiting for! Razor sharp samurai action coupled with a brutally realistic vision of life in sixteenth-century Japan, a real find."