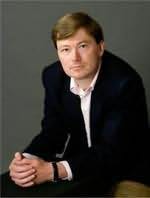 (b.1969)
Adrian Keith Goldsworthy is a British historian and author who specialises in ancient Roman history. Goldsworthy attended Westbourne School, Penarth. After studying ancient and modern history at St John's College, Oxford, he completed a D.Phil in ancient military history from Oxford University in 1994, and then used his dissertation as the foundation of his first book, The Roman Army at War 100 BC - AD 200.Goldsworthy was a Junior Research Fellow at Cardiff University for two years, and he has taught briefly at King's College London and was an assistant professor on the University of Notre Dame's London programme for six years. His expertise is in Roman history, but he also taught a course on the military history of the Second World War at Notre Dame University. Goldsworthy said that although he enjoyed teaching, he enjoyed writing more and now writes full-time.