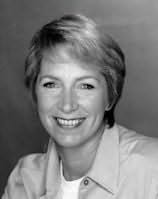 (b.1950)
Pam Rhodes is a British television presenter. She is famous for presenting the programme Songs of Praise. She has also appeared as herself in the programmes The Vicar of Dibley and The Brittas Empire. She made her television debut as presenter of About Anglia on Anglia Television in 1976.

Rhodes attended Gosport County Grammar School and did a secretarial course at Highbury Technical College. She first trained as a dancer, working professionally with the Black and White Minstrels and as a qualified youth worker teaching dancing and drama in youth clubs around London for ten years. She has also written several novels.