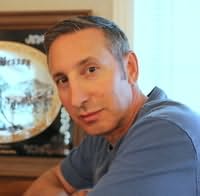 Dave Stanton is the author of five novels in the Dan Reno private eye series. They do not have to be read chronologically to be enjoyed, but for those who want to know, the order is: Stateline, Dying for the Highlife, Speed Metal Blues, Dark Ice, & Hard Prejudice.

Born in Detroit, Michigan, in 1960, Dave Stanton moved to Northern California in 1961. He received a BA in journalism from San Jose State University in 1983. Over the years, he worked as a bartender, newspaper advertising salesman, furniture mover, debt collector, and technology salesman. He has two children, Austin and Haley, and lives with his wife, Heidi, in San Jose, California.