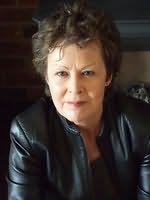 aka Eve Seymour
E.V. Seymour is the author of ten novels and has had a number of short stories broadcast on BBC Radio Devon. After a short and successful career in PR in London and Birmingham, she married and disappeared to Devon. Five children later, she returned and began to write seriously and has bent the ears of numerous police officers, firearms officers, scenes of crime, the odd lawyer and United Nations personnel. She also works by day as a freelance editorial consultant, specialising in crime fiction and thrillers.