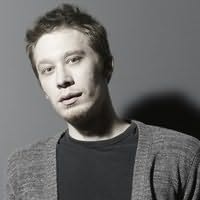 (b.1976)
Jon Skovron has never really fit in, and has no plans to start now. After twelve years of Catholic school, he went on to study acting at a conservatory program for four years before returning to his first love,writing. His second novel, Misfit, will be published in August, 2011 by Amulet Books. His first novel, Struts & Frets, was published by Amulet in 2009.

Jon lives with his two sons outside Washington, DC.