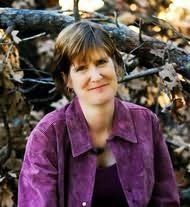 (b.1957)
Sharon Shinn is a journalist who works for a trade magazine. A graduate of Northwestern University, she has lived in the Midwest most of her life.

Elisha Mancer (2017)
(Dark Apostle, book 4)
E C Ambrose
"A vivid, violent, and marvelously detailed historical fantasy set in the perilous world that is medieval England in the middle of a war. Elisha Barber wades through blood and battle in his pursuit of arcane knowledge - forbidden love - and dangerous magic."

At the Table of Wolves (2017)
(Dark Talents, book 1)
Kay Kenyon
"I kept thinking about the book long after I read the last page, and I can't wait to see where Kenyon's own Talents take us next."

A Secret History of Witches (2017)
Louisa Morgan
"A grand family saga rich with historical detail and threaded through with magic. Like the women at the heart of the story, the book gains its power from the unfolding of generations, each one building on the wisdom and the mistakes of the past. I loved each new story just a little more than the one before it, and I kept hoping to read even one more tale of the Orchiere women!"

The Robots of Gotham (2018)
Todd McAulty
"When the robot apocalypse comes, I hope it's this much fun. Like The Martian and Ready Player One, The Robots of Gotham is set in a high-tech near-future where something has gone terribly wrong, and it's navigated by a hero who's quirky, resourceful, and as likable as they come. Read it for the rock'em-sock'em-robot action--read it for the deft world-building with its detailed taxonomy of intelligent machines--read it for the sobering parallels to modern-day issues and threats. Or just read it because it's a helluva good ride."
Visitors to this page also looked at these authors
Anne Bishop
Mercedes Lackey
Nalini Singh
Juliet Marillier
Michelle Sagara
Tanya Huff
L E Modesitt Jr
Patricia Briggs
Lois McMaster Bujold
R A Salvatore
David Weber
Brandon Sanderson
Michael J Sullivan
Anne McCaffrey
Ilona Andrews
Margaret Weis