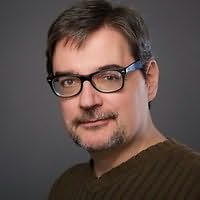 (b.1958)
Phoef Sutton is a writer, producer, and novelist who has written for shows such as Cheers, NewsRadio, and Boston Legal. Sutton is also the winner of two Emmy Awards, a Golden Globe, and a Peabody Award.

Anthologies edited
After Midnight: Tales from the Graveyard Shift (2019)

Double Wide (2017)
(Whip Stark, book 1)
Leo W Banks
"Double Wide is a rollicking page-turner. As twisted and bumpy as a desert road at night. Leo Banks crafts a fast-paced tale filled with colorful characters. He displays an excellent ear for bitter, cynical dialog and an unsparing eye for desperate characters running on empty. Read it!"