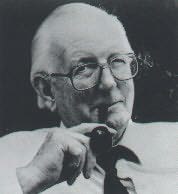 (1928 - 2013)
Tom Sharpe was born in 1928 and educated at Lancing College and Pembroke College, Cambridge. He did his National Service in the Marines before going to South Africa in 1951, where he did social work before teaching in Natal. He had a photographic studio in Pietermaritzburg from 1957 until 1961, when he was deported... From 1963 to 1972 he was a lecturer in History at the Cambridge College of Arts and Technology. In 1986 he was awarded the XXXIIIeme Grand Prix de l'Humour Noir Xavier Forneret.