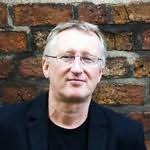 (b.1962)
Colin Bateman was born in Northern Ireland in 1962 and educated at Bangor Grammar School before joining the County Down Spectator, where he became the deputy editor until 1996. In 1990 he received a Journalist's Fellowship to Oxford University for his reports from Uganda and has received a Northern Ireland Press Award for his weekly satirical column. He won the Betty Trask Award in 1994.

The Good Thief's Guide to Venice (2011)
(Charlie Howard, book 4)
Chris Ewan
"Kicks against the cliches... and adds some wit and balls to [the] genre."