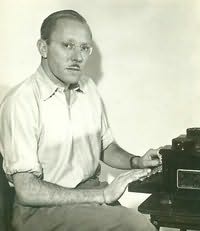 (1907 - 1971)
James Ramsey Ullman (19071971) was an American writer and mountaineer. He was born in New York. He was not a high end climber, but his writing made him an honorary member of that circle. Some of his writing is noted for being "nationalistic," e.g., The White Tower.

The books he wrote were mostly about mountaineering.

His works include Banner in the Sky (which was filmed in Switzerland as Third Man on the Mountain), and The White Tower.

He was the ghost writer for Tenzing Norgay's autobiography Man of Everest (originally published as Tiger of the Snows). High Conquest was the first of nine books for J.B. Lippincott coming out in 1941 followed by The White Tower, River of The Sun, Windom's Way, and Banner in the Sky which was a 1955 Newbery Honor book. All of these titles became major motion pictures.

Collections
The Silver Sword & Other Stories (1954)