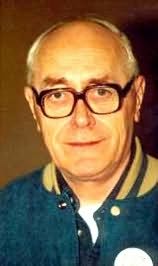 (1928 - 1999)
James White was a prolific Northern Irish author of science fiction novellas, short stories, and novels. He was born in Belfast and returned there after spending early years in Canada.

His novel The Watch Below is considered by some aficionados to be his finest work - a claustrophobic book describing the travails of parallel survivors of war (human) and accident (alien).

"The Silent Stars Go By" is an excellent example of alternative history. A Gaelic visitor to Alexandria, Egypt, realizes the industrial potential of a primitive steam engine constructed by Hero. The resulting society launches a starship in the year 1492.