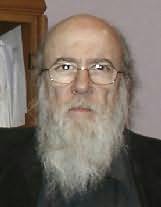 (b.1943)
Allen Wold was born in south-western Michigan, where he began writing teeny little stories when he discovered an old portable typewriter. He finished high school in Tucson, Arizona, and graduated fron Pomona College, in Claremont, California, where he later met his wife, Diane. They married in 1972, and moved to North Carolina, where he began his career as a full time writer. In 1986, he became a full time father, writing when he could make the time. In 2003, he became a full time writer again, when his daughter, Darcy, went off to college, also at Pomona. He has published nine novels (has written several more, most of which will never see print, thank God), several short stories (mostly for the Elf Quest anthologies), five non-fiction books on computers (he's completely self-taught, and it probably shows), and a number of articles, columns, reviews, and so forth, also concerning computers (written in language even he can understand). Currently, Allen has an epic heroic fantasy (2500 pages, 680,000 words) with an editor, and a bizarre haunted house story with an agent. Two more projects are in hand simultaneously. Allen has been running his version of a writer's workshop at various conventions for more than twenty five years, and has had some success, since several people have not only finished but sold stories started in the workshop. Allen is a member of SFWA, and Toastmasters International (which gives him a captive audience).