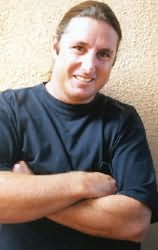 Australia (b.1960)
Tim Winton was born in Perth, Western Australia, but moved at a young age to the small country town of Albany.

While a student at Curtin University of Technology, Winton wrote his first novel, An Open Swimmer. It went on to win The Australian/Vogel Literary Award in 1981, and launched his writing career. In fact, he wrote "the best part of three books while at university". His second book, Shallows, won the Miles Franklin Award in 1984. It wasn't until Cloudstreet was published in 1991, however, that his career and economic future were cemented.

He is now one of Australia's most esteemed novelists, writing for both adults and children. All his books are still in print and have been published in eighteen different languages. His work has also been successfully adapted for stage, screen and radio. On the publication of his novel, Dirt Music, he collaborated with broadcaster, Lucky Oceans, to produce a compilation CD, Dirt Music – Music for a Novel.

He has lived in Italy, France, Ireland and Greece but currently lives in Western Australia with his wife and three children.