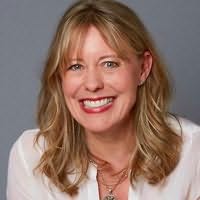 Amy Poeppel grew up in Dallas, Texas. She graduated from Wellesley College and worked as an actress in the Boston area, appearing in a corporate industrial for Polaroid, a commercial for Brooks Pharmacy, and a truly terrible episode of Americas Most Wanted, along with other TV spots and several plays. While in Boston, she also got her Masters in Teaching from Simmons College.

She is married to David Poeppel, a neuroscientist at NYU and Director of the Max Planck Institute in Frankfurt. For the past twenty years, they have lived in many cities, including San Francisco, Berlin, and New York City, and had three sons along the way. Amy taught high school English in the Washington, DC suburbs for several years, and after moving to New York, she worked as an Assistant Director of Admissions at Trevor Day School, where she had the fulfilling experience of meeting and getting to know hundreds of applicant families.

Emerald Coast (2017)
Anita Hughes
"EMERALD COAST delivers a sexy, sunlit, romantic escape, whisking the reader to the picturesque town of Porto Cervo, with all the tastes, sights, and feelings that accompany a glamorous seaside holiday -- a great summer read!"

The Husband Hour (2018)
Jamie Brenner
"A beautiful story of grief, healing, the power of forgiveness, and the enduring love of family."

The Ones We Choose (2018)
Julie Clark
"A novel with a wonderfully smart and strong protagonist, Julie Clark's debut The Ones We Choose is an impressive and surprising combination of hard science and raw emotion. In this absorbing story of friendship, parenting, and the intensity of the sibling bond, Clark reveals how messy family life can be and how the mess itself might be of great value. An engaging read!"

The Bucket List (2018)
Georgia Clark
"Combining the heat of Sally Thorne and the wit of Maria Semple, THE BUCKET LIST is poignant, super sexy, and hilarious."

Hollow Kingdom (2019)
Kira Jane Buxton
"What a surprising, funny, terrifying, marvelous, wholly original novel! Buxton combines a vivid horror show (think zombies and the gruesome, bloody extinction of man) with a touching love story between the unlikeliest of BFFs: a crow, a hound, and a man who's had a tough go of things on Tinder, and that was before his eyeball fell out. With humor and a style that brings to mind Tom Robbins and Karen Russell, Buxton's debut is heartwarming and heart stopping, hilarious and tragic."

Best Behavior (2020)
Wendy Francis
"Wendy Francis captures all the joy and pain of being an (almost) empty-nester in her latest novel. Picture a college graduation weekend on a lovely New England campus. Now mix in some booze, an ex or two, the in-laws, a trophy wife, and loads of secrets/scandals. Soon enough, no one is behaving at their best. A terrific summer read."

The Summer Set (2020)
Aimee Agresti
"With the drama and humor of a Shakespearean play, Agresti's novel is filled with backstage antics, on-stage tantrums, behind the scenes scandals, and off-stage romance, all in the crazy, fast-paced world of summer stock theater. Sparks fly and opposites attract as The Summer Set explores the blurred line between playing a part and being true to yourself."

Tiny Imperfections (2020)
Alli Frank and Asha Youmans
"Youmans and Frank's deep-dive into private school culture sets the stage for a dishy, charming story of West Coast elitism and parenting at its pushiest. But it's the characters, especially the marvelous Bordelon women, who give this delightful novel its heart and humor - and who make you long to be part of the family even after the last page."

The Two Mrs. Carlyles (2020)
Suzanne Rindell
"If you loved Rindell's The Other Typist, if you adored Jane Eyre, if you were riveted by Rebecca, you will be enthralled by The Two Mrs. Carlyles . . . Eerie and suspenseful . . . Rindell reminds her readers how quickly trust can be shattered."