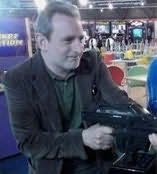 (b.1964)
Alan K Baker was born in Birmingham. After leaving university in 1991, he endured a series of increasingly unpleasant jobs, culminating in a nine-month stint as a packer in a Sheffield sausage factory, which served to increase his fascination with the macabre and outlandish. Since 1997, he has published a number of non-fiction books on the paranormal and popular history, which have been translated into seven languages.