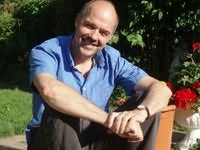 Chris Beckett is a former social worker and now university lecturer who lives in Cambridge. He is the author of twelve stories for Interzone: three of them, "La Macchina" (issue 46), "The Welfare Man" (issue 74) and "Valour" (issue 141 ) were taken for anthologies. "La Macchina" appeared in Gardner Dozois's The Year's Best SF and in another US anthology, Gendanken Fictions. "The Welfare Man" appeared in The Best of Interzone; "Valour" and "The Marriage of Sky and Sea" were both taken for Year's Best Science Fiction 5 (Harper Eos); and "The Warrior Half-and-Half" features in the Big Engine Interzone collection The Ant-Men of Tibet and Other Stories.

Anthologies containing stories by Chris Beckett
The Best of Interzone (1997)

Dream Paris (2015)
(Dream World, book 2)
Tony Ballantyne
"A real feat of imagination, this is a really exceptional book, unlike anything I've read before."

Stormblood (2020)
Jeremy Szal
"Vakov Fukasawa is a former soldier, addicted to the biotech inside his own body that makes him constantly crave for action. And there is plenty of action in this fast moving novel, but not at the expense of ideas, or of humanity, or of vivid descriptions of Szal's carefully imagined war-torn galaxy."