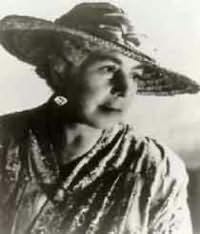 Elinor, her mother, and her younger brother Henzell were abandoned by 'Charles Morris when Elinor was three years old. (Charles Morris eventually went to live with another woman and had a son -- another Charles)

Elinor was educated in South Shields, the same town where she was born. After finishing her education, she attended Leeds Training College and returned to teach in her home town. It was around this time that she adopted the name Elinor Mary Brent-Dyer.

In 1922, Elinor published her first book -- Gerry Goes to School, which went on to become the first of the La Rochelle titles.

She was received into the Roman Catholic Church in 1930.

In 1933, Elinor and her mother moved to Hereford. For a while, Elinor was a commuting governess, but she eventually opened her own school in Hereford -- the Margaret Roper School. This school was closed in 1948. Elinor then devoted all her time to writing.

In 1964, following the death of her mother several years earlier, Elinor moved to Redhill. She died there in 1969, and her final book was published posthumously the same year.