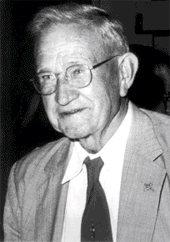 (1890 - 1965)
Edward Elmer 'Doc' Smith was one of the dominant forces in the sf of the thirties and forties and continued to write into the sixties. Most of his work falls into two series of space operas--the Skylark of Space sequence and the Lensman books. In The Skylark of Space, Richard Seaton invents an interplanetary, and then an interstellar drive, and is caught in endless rivalry for love and wealth with the equally brilliant Duquesne, a criminal mastermind; their battle extends among the stars as they recruit, and periodically exterminate, alien allies of progressively greater weirdness. The Lensman books started as an account of the adventures of Kimball Kinnison of the Galactic Patrol and his various fellow cops, human and not, and turns into an apocalyptic scenario in which all of human and alien history is manipulated by good and evil aliens across millions of years; eventually Kinnison's mutant children destroy the evil Eddorians by dropping several planets on them. All of this has a certain crude vigour--Smith was one of the first people in pulp sf to exploit that sense of scale in time and space that Olaf Stapledon was doing more thoughtfully in his work and Smith was one of the first sf writers whose aliens are not just human beings in strange suits; his work is clumsy and sometimes descends in the direction of kitsch, but it has its own flavour.
Genres: Science Fiction
Series
Skylark
1. The Skylark of Space (1928) (with Lee H Garby)
2. Skylark Three (1948)
3. Skylark of Valeron (1949)
4. Skylark DuQuesne (1966)