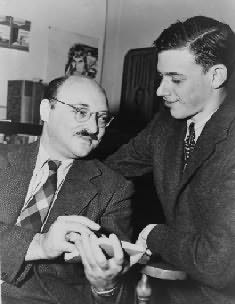 aka Barnaby Ross
Ellery Queen is the pseudonym of cousins Frederic Dannay and Manfred B. Lee. Ellery Queen is also the name of their famous detective who has appeared in more than 30 novels and 70 short stories. He has been on the radio, in the movies, on television, and in comic books. The Mystery Writers of America gave Queen 7 Edgar awards and its coveted Grand Master award. Dannay and Lee also founded and edited Ellery Queen's Mystery Magazine which, at 61 years and still going, is the longest running mystery anthology magazine in American history. They wrote Queen's Quorum, a scholarly examination of the detective short story, and edited more than 90 books of detective fiction. Worldwide, their books have sold more than 150 million copies.