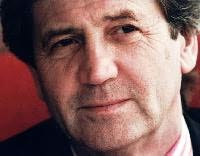 (b.1939)
Melvyn Bragg's first novel, For Want of a Nail, was published in 1965 and since then his novels have included The Hired Man, for which he won the Time/Life Silver Pen Award, Without a City Wall, winner of the John Llewellyn Rhys Prize, Credo, The Maid of Buttermere and The Soldier's Return, which was published to huge critical acclaim in 1999 and won the WHSmith Literary Award. He has also written several works of non-fiction including Speak for England, an oral history of the twentieth century, Rich, a biography of Richard Burton, On Giants' Shoulders, and most recently, The Adventure of English, based on the Granada TV series. He is controller of Arts at LWT and President of the National Campaign for the Arts, and in 1998 he was made a life peer. He lives in London and Cumbria.

The Mangan Inheritance (1979)
Brian Moore
"Moore is a thoroughbred... a fine storyteller."