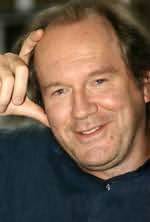 (b.1952)
William Boyd was born in Ghana. He was brought up there and in Nigeria. He was educated at the universities of Nice, Glasgow and Oxford. He is the author of seven previous novels and the recipient of many awards including the Whitbread First Novel, the John Llewellyn Rhys Prize, the James Tait Black Memorial Prize and the Sunday Express Book of the Year Award. An Ice-Cream War was shortlisted for the Booker Prize. He is married and lives in Chelsea, London.

The Outsider (1942)
Albert Camus
"One of those books that marks a reader's life indelibly."

The Foundling Boy (1975)
Michel Déon
"Our lives would be all the richer if we read a Michel DÃ©on novel."

The Kindness of Women (1991)
(Empire of the Sun, book 2)
J G Ballard
"The book is full of mesmerising writing, classic examples of the Ballard style, paragraphs and pages that disturb and enthral... A force is operating in this astonishing book which is hard to resist."

Sozaboy (1994)
Ken Saro-Wiwa
"...one of the great achievements of African Literature."

Falling Away (1996)
Candida Crewe
"A beautiful and impressive feat of imagination."

The Memory of All That (1999)
Bryan Forbes
"A fascinating novel, utterly compelling and wonderfully authentic."

Something in the Sea (2006)
Yves Bonavero
"I was gripped and enthralled."

Collected Stories (2010)
Hanif Kureishi
"No one else casts such a shrewd and gimlet eye on contemporary life."

The Death of Rex Nhongo (2015)
C B George
"A terrific novel absolutely compelling and chilling. A wonderfully astute and forensic blend of fact and fiction, lies and truth."

Last Stories (2018)
William Trevor
"He is, I think, sui generis, and in his 12 collections (and 13 novels, and two novellas: an exhibition of near-Updikean energy), he has created a version of the short story that almost ignores the form's hundred or so years of intricate evolution. These stories stay in the mind long after they're finished because they're so solid, so deliberately shaped and directed so surely toward their solemn, harsh conclusions."

Nice Jumper (2018)
Tom Cox
"Does for golf what Fever Pitch did for football...Funny, cleaver and all-too-horribly true."

Only to Sleep (2018)
(Philip Marlowe)
Lawrence Osborne
"A brilliant Raymond Chandler continuation novel with an ageing Philip Marlowe. Osborne and Chandler are a perfect match."

In the Full Light of the Sun (2019)
Clare Clark
"A completely fascinating novel about the early 20th century art world and its many dubious machinations. Expertly researched, compellingly narrated and full of potent resonance today."

Lomita For Ever (2019)
Trevor Eve
"At once audacious, coolly knowing, highly observant and wryly funny."

Independence Square (2020)
A D Miller
"A tremendous novel - taut, compelling, reeking of authenticity. A.D. Miller writes with exemplary precision and sophistication. Independence Square is an unsparing examination of human beings caught up in historical forces they can barely comprehend."

We Germans (2020)
Alexander Starritt
"We Germans is a remarkable and audacious novel that is harrowingly real and, at the same time, asks the most searching questions about men at war."

The Sandpit (2020)
Nicholas Shakespeare
"A remarkable contemporary thriller – with shades of Graham Greene and Le Carré about it – but also a profound and compelling investigation of a hugely complex human predicament. Brilliantly observed, captivatingly written, grippingly narrated – a triumph."

The Answer to Everything (2021)
Luke Kennard
"A tremendous novel – funny, shrewd, poignantly destabilising – and charged with Luke Kennard’s laconic wit and his gimlet eye for the foibles and nuances of human behaviour. A huge success."