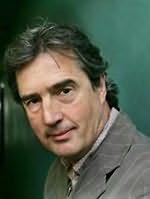 Ireland (b.1955)
Sebastian Barry was born in Dublin in 1955. His play, The Steward of Christendom, first produced in 1995, won many awards and has been seen around the world. His novel, The Whereabouts of Eneas McNulty, appeared in 1998. He lives in Wicklow with his wife and three children.

The Love and Death of Caterina (2011)
Andrew Nicoll
"A life-enhancing storyteller, of stellar wit and intriguing depth... pure gold."

Becoming Belle (2018)
Nuala O'Connor
"Nuala O'Connor has the thrilling ability to step back nimbly and enter the deep dance of time. This is a hidden history laid luminously before us of an exultant Anglo-Irish woman navigating the dark shoals and the bright fields of a life."

Shadowplay (2019)
Joseph O'Connor
"Joseph O’Connor is a very great artist and storyteller. The quotient of enjoyment in his extraordinary new novel is stupendous."

Cher Ami and Major Whittlesey (2020)
Kathleen Rooney
"A properly mysterious, warmly convincing work of bright imagination. A pigeon and a haunted man returned generously, gently, to the story of the world."