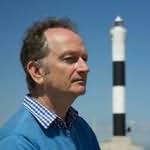 Author and screenwriter Simon Booker has written prime time TV drama for BBC1, ITV and US TV. His UK credits include The Inspector Lynley Mysteries, Holby City and The Mrs Bradley Mysteries. He has written seven plays for BBC Radio 4, worked extensively as a producer in television and radio, and as a journalist.

Have You Seen This Girl? is his debut psychological thriller, the first in a series featuring Morgan Vine, a single mother and investigative reporter who specialises in miscarriages of justice. Publication by Bonniers new Twenty7 imprint is scheduled for early 2016.

Simon lives in London and Deal. He is a trained volunteer facilitator in Restorative Justice, working with offenders at HMP Brixton. His partner is fellow crime writer MJ McGrath. They often discuss murder methods over breakfast.