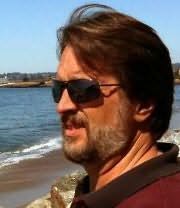 (b.1957)
STEVE BREWER is the author of more than 20 books, including the recent crime novels A BOX OF PANDORAS, PARTY DOLL, LOST VEGAS, THE BIG WINK and CALABAMA.

His first novel, LONELY STREET, was made into an independent Hollywood comedy starring Robert Patrick, Jay Mohr and Joe Mantegna. BOOST currently is under film/TV option.

Brewer's short fiction appeared in the anthologies DAMN NEAR DEAD, THE LAST NOEL and CRIMES BY MOONLIGHT, and he's published articles in magazines such as Mystery Scene, Crimespree and Mystery Readers' Journal.

A writing coach, Brewer has taught at the University of New Mexico, the Midwest Writers Workshop and the Tony Hillerman Writers Seminar. He regularly speaks at mystery conventions, and was toastmaster at Left Coast Crime in Santa Fe, NM, in 2011.

He served two years on the national board of Mystery Writers of America, and twice served as an Edgar Awards judge. He's also a member of International Thriller Writers.

A graduate of the University of Arkansas-Little Rock, Brewer worked as a daily journalist for 22 years, then wrote a syndicated weekly column for another decade. The column, called The Home Front, produced the raw material for his humor book TROPHY HUSBAND.