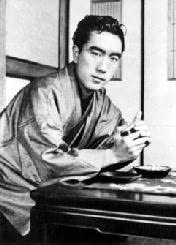 (Kimitake Hiraoka)
Japan (1925 - 1970)
Yukio Mishima, one of the most spectacularly gifted writers in modern Japan, was born into a samurai family in 1925. He attended the Peers' School and Tokyo Imperial University, and for a time worked at the Ministry of Finance. His first full length novel, Confessions of a Mask, appeared in 1949, and since then he published over a dozen novels, almost all of which were translated into English and other languages during his.lifetime.

Mishima's reverence for the Japanese martial arts led him to take up Kendo (a type of fencing, with wooden swords) and Karate, as well as body-building, and by 1968 he had become a Kendo master of the fifth dan. He also organized a "private army" called the Shield Society, and in November 1970 he and his group forced their way into a Self-Defense Force headquarters in Tokyo, where Mishima, after reading out a proclamation, committed ritual suicide with a young follower in the commanding officer's room. On the morning of his death, the last volume of Mishima's tetralogy, The Sea of Fertility was delivered to his publisher.