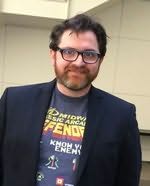 (b.1972)
Ernest Cline is an American novelist, spoken word artist and screenwriter. In June 2010 Cline sold his first novel Ready Player One in a bidding war to the Crown Publishing Group (a division of Random House). The film rights to the novel were sold the following day to Warner Bros. with Cline attached to write the screenplay.

Non fiction
The Importance of Being Ernest (2006)

Ex-Heroes (2010)
(Ex-Heroes, book 1)
Peter Clines
"I loved this pop culture-infused tale of shamed superheroes struggling to survive a zombie apocalypse in the ruins of Hollywood. It's 'The Avengers' meets 'The Walking Dead' with a large order of epic served on the side."

The Clockwork Dynasty (2017)
Daniel H Wilson
"The Clockwork Dynasty is my new favorite alternate history novel! It's like some fantastic hybrid of Highlander and The Terminator--or maybe a cross between I, Robot and The Difference Engine, with a dash of Blade Runner for good measure. It reads like classic steampunk on steroids. In other words, it's totally bad ass and you're going to love it."

Supermarket (2019)
Bobby Hall
"Bobby Hall has crafted a mind-bending first novel, with prose that is just as fierce and moving as his lyrics. Supermarket is like Naked Lunch meets One Flew Over the Cuckoo's Nest--if they met at Fight Club."

The Andromeda Evolution (2019)
Michael Crichton and Daniel H Wilson
"The Andromeda Evolution is both a kick-ass sequel and a loving tribute to one of the greatest science fiction novels ever written. Daniel H. Wilson has taken up Crichton’s mantle and reinvented the techno-thriller, by continuing the tale that invented that genre. This is a meticulously crafted adventure story, packed with action, mystery, wonder, and just enough hard science to scare the hell out of you. So good!"

Project Hail Mary (2021)
Andy Weir
"One of the most original, compelling, and fun voyages I've ever taken. Weir imbues every page of this rollicking adventure with an unabashed love and respect for science, while giving us a prescient glimpse of where it could take us and how it might save us."
Visitors to this page also looked at these authors
Harlan Coben
Suzanne Collins
James S A Corey
James Patterson
David Baldacci
Clive Cussler
Michael Connelly
Orson Scott Card
Lee Child
Andy Weir
Jim Butcher
Mary Higgins Clark
Lincoln Child
Janet Evanovich
Neil Gaiman
Tom Clancy