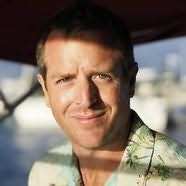 (b.1975)
Hugh Howey spent eight years living on boats and working as a yacht captain for the rich and famous. It wasn't until the love of his life carried him away from these vagabond ways that he began to pursue literary adventures, rather than literal ones.

Hugh wrote and self-published his first young adult novel, Molly Fyde and the Parsona Rescue. The Molly Fyde series won rave reviews and praise from readers but it was the release of Wool that made his career take off.

Hugh lives in Jupiter, Florida with his wife Amber and their dog Bella.

Bird Box (2014)
(Bird Box , book 1)
Josh Malerman
"A book that demands to be read in a single sitting, and through the cracks between one's fingers."

Wolf Skin (2014)
Jason Gurley
"Jason Gurley will be a household name one day."

Aye, Robot (2017)
(Rex Nihilo, book 2)
Robert Kroese
"A brilliant sequel to one of my favorite romps of all time."