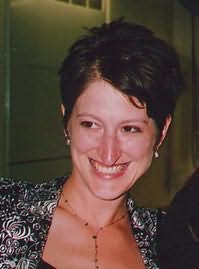 Julie Cohen was born in the U.S.A. and brought up in the mountains of western Maine. There wasn't much going on in Maine, so she made stuff up. She spent most of her childhood with her nose in a book and wrote her first novel at age eleven, a fantasy story about a female teenage wizard. In high school, she and her best friend wrote wildly improbable romances about their favourite rock stars. At university she wrote newspaper features and a weekly cartoon strip about an Elvis look-alike with a pet squid. She spent a year studying at Cambridge University in England, and fell in love with the country and the sexy accents.

After attaining her first degree in English literature, she moved to England and researched fairies in children's literature for a postgraduate degree. She started writing funny, sexy stories in her spare time. She started writing her first Harlequin romance on a blueberry farm in Maine, and finished it on a beach in Greece. This one, and several others, collected rejection letters. Shortly after placing in the finals in the Romance Writers of America's Golden Heart contest, she sold to Harlequin Mills & Boon.

Julie lives in the south of England with her husband and her son, and still reads everything in sight. Her other hobbies include walking, travelling, listening to loud music, watching films and eating far too much popcorn. She is teased daily about her American accent.

The Girl Who Lied (2016)
(Girl Who Lied, book 1)
Sue Fortin
"A twisty romantic page-turner that will keep you guessing."

Lost For Words (2017)
Stephanie Butland
"Loveday is a marvellous character and she captured my heart from the very first page . . . and her bookshop is the bookshop of readers' dreams."

The Light We Lost (2017)
Jill Santopolo
"An affecting and beautifully-written story about love and missed chances, and how global events can change the course of a single person's life."

The Other Us (2017)
Fiona Harper
"Touching, uplifting and emotional?I was pulled into this moving story of a woman questioning love, and finding herself."

The Last Day (2018)
Claire Dyer
"A tender, beautifully written book about marriage, love, grief and fear: how all can be lost in a moment, and how hope survives."

All That Was Lost (2018)
(Shakespeare Rebooted)
Alison May
"A resonant, emotional story about grief, loss and love with a complex, tragic heroine—a fake psychic reaching the end of her career. Although it's about death, this story is never depressing, and ultimately it's about recovery and healing."

The Flight of Cornelia Blackwood (2019)
Susan Elliot Wright
"Dark and compelling, a slow-motion collapse; I read it in 24 hours with my heart in my mouth. So good!"

Insatiable (2021)
Daisy Buchanan
"It reminded me of Bridget Jones's Diary - if Bridget were bisexual and Daniel Cleaver were a couple who were into group sex."

How To Save A Life (2021)
Eva Carter
"How to Save a Life is an epic novel that starts with one life-or-death event and then follows the lives of three complex people to show how that moment changed everything. And this novel will change you. It’s extraordinary—a very, very special book indeed."