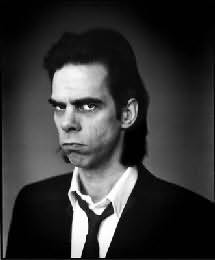 (Nicholas Edward Cave)
Australia (b.1957)
Nicholas Edward Cave is an Australian musician, songwriter, author, screenwriter, painter, and occasional actor. He is best known for his work in the rock band Nick Cave and the Bad Seeds, established in 1984, who have become critically acclaimed for their fascination with American roots music. Before that, he had fronted the group The Birthday Party in the early 1980s, a band renowned for its highly dark, challenging lyrics and violent sound influenced by blues and post-punk. In 2006, he formed the garage rock band Grinderman that released its debut the following year. Cave's music is generally characterised by intensity and a wide variety of influences. Nick Cave currently lives in Hove, in England.
Novels
And the Ass Saw the Angel (1989)
The Death of Bunny Munro (2009)

The Last Werewolf (2011)
(Last Werewolf, book 1)
Glen Duncan
"Magnificent. A sexy, blood-spattered page-turner, beautifully crafted and full of genuine suspense, that tears the thorax out of the horror genre."

The Cook (2012)
Wayne Macauley
"A riot of a novel. Gripping and subversive."