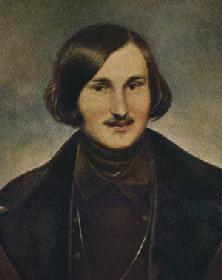 (Nikolai Vasilevich Gogol)
Russia (1809 - 1852)
Nikolai Vasilievich Gogol was born in the Ukrainian Cossack village of Sorochyntsi, in Poltava Governorate of the Russian Empire, present-day Ukraine. His mother was a descendant of Polish nobility. His father Vasily Gogol-Yanovsky, a descendant of Ukrainian Cossacks, belonged to the petty gentry, wrote poetry in Russian and Ukrainian, and was an amateur Ukrainian-language playwright who died when Gogol was 15 years old.

In 1820 Gogol went to a school of higher art in Nizhyn and remained there until 1828. It was there that he began writing. Very early he developed a dark and secretive disposition, marked by a painful self-consciousness and boundless ambition. Equally early he developed an extraordinary talent for mimicry which later on made him a matchless reader of his own works.

In 1828, on leaving school, Gogol came to Petersburg. He had hoped for literary fame and brought with him a Romantic poem of German idyllic life Ganz K&#252chelgarten. He had it published, at his own expense, under the name of "V. Alov." The magazines he sent it to almost universally derided it. He bought all the copies and destroyed them, swearing never to write poetry again.
Novels
The Government Inspector (1836)
Dead Souls (1842)
Taras Bul'Ba (1842)

Books about Nikolai Gogol
The Fantasts (1984) by Edmund Little