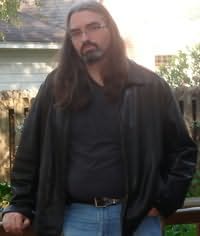 A writer, podcaster, and software architect from Houston, Texas, Paul E Cooley has been writing since the age of 12. In 2009, he began producing free psychological thriller and horror podcasts, essays, and reviews available from Shadowpublications.com and iTunes.

His stories have been listened to by thousands and he has been a guest on such notable podcasts as Podioracket, John Mieraus Podcast Teardown, Geek Out with Mainframe, Shadowcast Audio, and Vertigo Radio Live. In 2010, his short story Canvas and novella Tattoo were nominated for Parsec Awards. Tattoo became a Parsec Award finalist. He has collaborated with New York Times Bestselling author Scott Sigler on the series The Crypt and co-wrote the novella The Rider (projected to release in 2014). In addition to his writing, Paul has contributed his voice talents to a number of podiofiction productions.

He is also a co-host on the renown Dead Robots Society writing podcast.