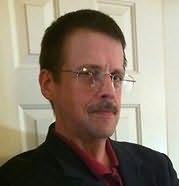 Located in rural Tennessee, Mark Wandrey has been creating new worlds since he was old enough to write. After penning countless short stories, he realized novels were his real calling and hasn't looked back since. A lifetime of diverse jobs, extensive travels, and living in most areas of the country have uniquely equipped him with experiences to color his stories in ways many find engaging and thought provoking.
His current work is the Four Horsemen universe, centering around the brand new Cartwright's Cavaliers. The 4HU is a universe full of aliens, mercenaries, and adventure. Placed just a hundred years in the future, humanity finds itself part of a vast, multi-thousand race Galactic Union. And the only thing we have of value to trade is our time honed ability to kick butt.
His other series include the Turning Point series, a zombie apocalypse book with a twist. A Time to Die (2016 DragonCon Dragon Award finalist) was released in May 2016, and the soon to be released sequel, A Time to Run. And the Earth Song series, five space opera books placed in a future where an orphaned mankind must fight for its very existence in a hostile galaxy.