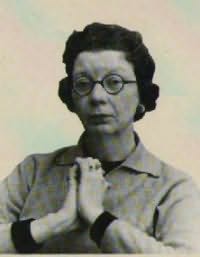 (b.1912)
Not very much is known about the author Celia Dale except for a few scant details. Celia Dale was born in 1912 and she was daughter of the actor, James Dale and was married to the journalist and critic, Guy Ramsey until his death in 1959. She worked in Fleet Street and as a publishers adviser and book reviewer. Some of her books were dramatised on radio and TV. Dales first book appeared in 1943 but it was her later novels where she branched out in to the realms of psychological crime. In all, Dale produced thirteen novels and a collection of short stories.

Celia Dale took everyday domestic situations and gave them a bitter twist. In Helping with Enquiries there are only three main protagonists, their story revolving around the murder of the mother. In A Helping Hand the vulnerability of the elderly is masterfully portrayed. Dale won the 1986 Crime Writers Association Veuve Cliquot Short Story Award for Lines of Communication which appears in her short story collection, A Personal Call and other stories which show that Dale had the short story down to a fine art. Her final book in 1988 was Sheeps Clothing.

Celia Dale died on the 31st December 2011, just short of her hundredth birthday.