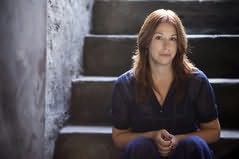 Julia Dahl was born in Fresno, Calif., to a Lutheran father and a Jewish mother. She currently lives in Brooklyn, N.Y.

Julia has been writing about crime since 2004 when Seventeen magazine sent her to cover the story of a young Birmingham, Ala., girl who had been killed by her mother. Since then, she has worked as a freelance reporter at the New York Post, the deputy managing editor of The Crime Report, and now covers crime and justice for CBSNews.com.

Julia's feature articles have appeared in Mental Floss, Salon, Pacific Standard, the Columbia Journalism Review, the Boston Globe Sunday Magazine, and the Daily Beast, among others. She has been the recipient of fellowships from the H.F. Guggenheim Foundation and the Nation Institute for her reporting on criminal justice issues.

Before turning her attention to crime and justice, Julia was an editor at Redbook and Marie Claire. She began her career fact-checking at Entertainment Weekly.

INVISIBLE CITY is her first novel. She is at work on the sequel

The Wolf Wants In (2019)
Laura McHugh
"The Wolf Wants In is a timely, spellbinding new novel from one of the best writers working today. Laura McHugh brings the tangled loyalties and tough choices of people struggling to survive in—or escape from—a violent Midwestern town roaring to life in this chilling, compulsively readable thriller."

Untamed Shore (2020)
Silvia Moreno-Garcia
"Untamed Shore is both transporting and transfixing. Set in a small Baja town in the seedy 1970s, Silvia Moreno-Garcia's latest takes us into a world soaked in sunshine and secrets, where everyone is working an angle and the looming sense of menace builds with nearly each page-turn. A shrewd, exciting thriller by a writer with a fresh vision and a powerful voice."