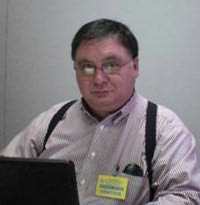 (b.1947)
Michael Flynn, sometimes published as Michael F. Flynn, works full time as a statistician and writes science fiction as a sideline. Nearly all of Flynn's work falls under the category of hard science fiction, although his treatment of it can be unusual since he has applied the rigor of hard science fiction to "softer" sciences such as sociology in works such as In the Country of the Blind. Much of his short fiction has appeared in Analog Science Fiction and Fact.