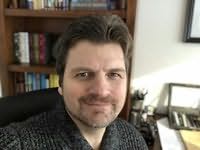 Germany
Marko Kloos is a novelist, freelance writer, and unpaid manservant to two small children. He is a graduate of the Viable Paradise SF/F Writers' Workshop.

Marko writes primarily science fiction and fantasy because he is a huge nerd and has been getting his genre fix at the library ever since he was old enough for his first library card. In the past, he has been a soldier, a bookseller, a freight dock worker, a tech support drone, and a corporate IT administrator.

A former native of Germany, Marko lives in New Hampshire with his wife and two children. Their compound, Castle Frostbite, is patrolled by a roving pack of dachshunds.

Graphic Novels
Sorry, we're not listing graphic novels by this author
Novellas
On The Use Of Shape-Shifters In Warfare (2019)
Berlin is Never Berlin (2020)

Admiral (2016)
(Admiral, book 1)
Sean Danker
"A fast-paced and engaging intrigue, with characters the reader will be attached to and root for despite their flaws and faults...The Martian meets Bourne Identity by way of Alien."

Switchback (2017)
(Nightshades , book 2)
Melissa F Olson
"Nightshades is a tautly written paranormal mystery, and Melissa Olson’s bloodsuckers don’t screw around. This is a suspenseful, fast-paced, enjoyable read?a bloody-knuckled X-Files with a dash of Silence of the Lambs, featuring the scariest vampires this side of Peter Watts’ Blindsight."

Planetside (2018)
(Planetside, book 1)
Michael Mammay
"PLANETSIDE is a smart and fast-paced blend of mystery and boots-in-the-dirt military SF that reads like a high-speed collision between Courage Under Fire and Heart of Darkness."

Cry Pilot (2019)
(Cry Pilot, book 1)
Joel Dane
"Joel Dane's Cry Pilot is a hyperkinetic and unflinching battle narrative that never loses sight of the truth of being a soldier: the squad comes before all else. Told with momentum and immediacy, Cry Pilot is authentic, exciting, and excellent."