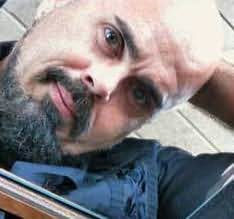 Christopher Buehlman is a writer and performer based in St. Petersburg, Florida. He is the winner of the 2007 Bridport Prize in Poetry and a finalist for the 2008 Forward Prize for best poem (UK). He spent his twenties and thirties touring renaissance festivals with his very popular show Christophe the Insultor, Verbal Mercenary. He holds a Bachelor’s degree in French Language from Florida State University, where he minored in History. He enjoys theater, independent films, chess, archery, cooking with lots of garlic, and thick, inky, bone-dry red wines. He lives with his wife, actress Geneva Rae, and their rescued dog, Duck, who is believed to be the result of an encounter between a Shiba Inu and a Pit Bull.

Mongrels (2016)
Stephen Graham Jones
"With lupine tongue tucked well into cheek, Mongrels is at once an adolescent romp through the tangled woods of family history and a rich compendium of werewolf lore old and new."

The Boatman's Daughter (2020)
Andy Davidson
"This is the second novel I've read by Andy Davidson, which is to say that I have now visited two dark, well-realized southern landscapes full of interesting antagonists and cool set pieces. This author's greatest strength is place--he takes you there. You can almost smell the flora in the marsh, feel the planks of the rough-built structures under your bare feet. The Boatman's Daughter is a supernatural cousin to Daniel Woodrell's gritty Ozarks thrillers; a sensual wetlands fable rich in sensory detail and replete with Slavic folklore."