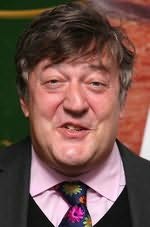 aka Mrs. Stephen Fry
As well as being the bestselling author of three novels, Making History, The Hippopotamus, and The Liar, and the first volume of his autobiography, Moab is My Washpot, Fry has played Peter in Peter's Friends, Oscar Wilde in the film Wilde, Jeeves in the television series Jeeves and Wooster and (a closely guarded show-business secret, this) Laurie in the television series Fry and Laurie.

A Bear Called Paddington (1958)
(Paddington Bear)
Michael Bond
"I've always had great respect for Paddington... He is a British institution."

Galahad at Blandings (1964)
(Blandings)
P G Wodehouse
"What can one say about Wodehouse? He exhausts superlatives."

Life On Mars (1996)
Alexander Stuart
"Simply the most stunning read of the year."

The Sherlock Effect (1997)
Raymond Kay Lyon
"It is a tremendous read."

Perfect Tense (2001)
Michael Bracewell
"A unique and priceless pearl of a book."

Montmorency (2003)
(Montmorency, book 1)
Eleanor Updale
"One of the most original, witty and delicious books to have arrived for a very long time."

Bullet Points (2004)
Mark Watson
"Woody Allen and William Boyd have had a bastard love-child and his name is Mark Watson."

The Neil Gaiman Reader: Selected Fiction (2006)
Neil Gaiman and Darrell Schweitzer
"Gaimen is a god in the universe of story."

All in the Mind (2008)
Alastair Campbell
"Campbell's insights into power and politics are delivered with a trademark assured elegance, but it is the devastating penetration of the human mind that takes this novel out of the ordinary. I have rarely read a book where the agonies and insecurities of mental trauma have been so well chronicled."

Magnificent Bastards (2009)
Rich Hall
"One of the funniest, smartest and most acute American wits alive."

The Man Who Wouldn't Stand Up (2012)
Jacob M Appel
"A darkly comic satire, full of insight into American culture."

The Folded Man (2013)
M T Hill
"Captures the shell and essence of Britain."

A Short Affair (2018)
Simon Oldfield
"A dazzling anthology uniting the written word with the visual."

Take Nothing With You (2018)
Patrick Gale
"Absolutely one of his complete best. So many funny and tender and terrific scenes. He hovers between social comedy and apocalyptic tragedy without the move appearing artificial or contrived. Just a wonderful, wonderful read."

The Silent Patient (2019)
Alex Michaelides
"Absolutely brilliant . . . I read it in a state of intense, breathless excitement and never saw the ending coming. Not for a second!"