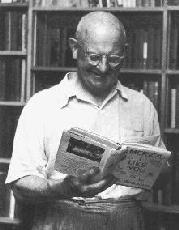 (1881 - 1975)
Pelham (Plum) Grenville Wodehouse was born in 1881 in Guildford, Surrey. Having spent his early years in Hong Kong he was sent to Dulwich College and worked as a banker and journalist before embarking on a career as a prolific and popular writer. He became an American citizen in 1955 and was knighted in 1975 a few weeks before his death in Southampton, New York on February 14.

Monty Bodkin
The Luck of the Bodkins (1935)
Pearls, Girls and Monty Bodkin (1972)
aka The Plot that Thickened
Bachelors Anonymous (1973)

Ship's Company (1911)
W W Jacobs
"When I started out as a writer Jacobs represented to me perfection. Others might abide my question, but he was free, as the fellow said. Even in my early twenties, when my critical facilities were nothing to write home about, I could see how good he was and how simply and unerringly he got his effects, and nothing has changed my high opinion of him since. He was unique, and still is."
Visitors to this page also looked at these authors
Agatha Christie
Sebastian Faulks
Wilbur Smith
Alexander McCall Smith
Jacqueline Winspear
Stephen King
J R R Tolkien
Virginia Woolf
Sherryl Woods
Kathleen Woodiwiss
Lucinda Riley
Charles Dickens
Daphne du Maurier
Terry Pratchett
Dorothy L Sayers
Kurt Vonnegut Jr