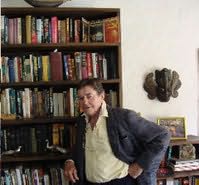 JOHN GORDON DAVIS was born in Southern Rhodesia, now Zimbabwe, and educated in South Africa. He earned a BA in Political Science, paying his way through university by working as a deckhand on British merchant ships and on the Dutch whaling fleet at the Antarctic. He went on to take an LL.B. degree whilst serving as a judge´s clerk in Rhodesia.

Called to the Bar, he was appointed an assistant public prosecutor in the Magistrate´s Courts during the troubled years leading up to Rhodesia´s Unilateral Declaration of Independence, before becoming Crown Counsel in the Attorney General´s Chambers. He was later appointed to the same position in Hong Kong during the turbulence of China´s Great Proletarian Cultural Revolution. He quit this post to become a full-time writer when his first book, Hold My Hand I´m Dying became a best-seller.