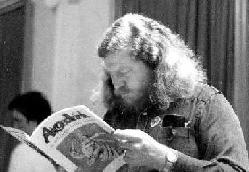 (1945 - 1994)
Karl Edward Wagner (4 December 1945 - 13 October 1994) was an American writer, editor and publisher of horror, science fiction, and heroic fantasy, who was born in Knoxville, Tennessee and originally trained as a psychiatrist. His disillusionment with the medical profession can be seen in the stories "The Fourth Seal" and "Into Whose Hands". He described his world view as nihilistic, anarchistic and absurdist, and claimed, not entirely seriously, to be related to "an opera composer named Richard".

From the Heart of Darkness (1983)
David Drake
"A collection of thoroughly vicious, uncompromising horror stories...These stories may frighten you and they may turn your stomach, but you are not going to forget them - and that is the hallmark of successful horror fiction."
Visitors to this page also looked at these authors
Edgar Wallace
K B Wagers
Mark Walden
Lea Wait
C M Waggoner
Andrew J Offutt
David Weber
Jo Walton
Jules Wake
Catriona Ward
F Paul Wilson
Fiona Walker
Gertrude Chandler Warner
David Wellington
Martin Walker
Brent Weeks