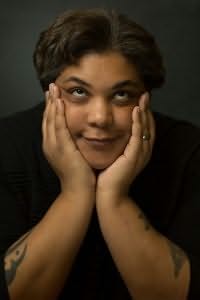 Roxane Gays writing has appeared or is forthcoming in Best American Mystery Stories 2014, Best American Short Stories 2012, Best Sex Writing 2012, A Public Space, McSweeneys, Tin House, Oxford American, American Short Fiction, West Branch, Virginia Quarterly Review, NOON, The New York Times Book Review, Bookforum, Time, The Los Angeles Times, The Nation, The Rumpus, Salon, and many others. She is the co-editor of PANK. She is also the author of the books Ayiti, An Untamed State, Bad Feminist, and Hunger, forthcoming from Harper in 2016.

Out of Line collection
Graceful Burdens (2020)

I Almost Forgot About You (2016)
Terry McMillan
"The warmth and wisdom we have come to expect from Terry McMillan are on full display and you won't be able to walk away from Georgia and her exuberant life. This is that thrilling kind of novel that reminds us how sometimes, fairy tales happen when we least expect them, if only we open ourselves to possibility."

The Book of Joan (2017)
Lidia Yuknavitch
"Lidia Yuknavitch is a writer who, with each ever more triumphant book, creates a new language with which she writes the audacious stories only she can tell. The Book of Joan is a raucous celebration, a searing condemnation, and fiercely imaginative retelling of Joan of Arc’s transcendent life."

Made for Love (2017)
Alissa Nutting
"There is no one who negotiates the absurd as vigorously yet poignantly as Nutting. In her second novel... there are sex dolls and a senior citizen trailer park and brain chips and a con man who loves dolphins and still, the story makes sense ... Brilliant, dense, hilarious writing."

Eat Only When You're Hungry (2017)
Lindsay Hunter
"The frailties of the human body and the human heart are laid bare in Lindsay Hunter's utterly superb novel Eat Only When You're Hungry. There is real delicacy, tenderness, and intelligence with which Hunter tackles this portrait of a broken family of people who don't realize just how broken they are until they are forced to confront the fractures between them and within themselves. With this novel, Hunter establishes herself as an unforgettable voice in American letters. Her work here, as ever, is unparalleled."

The Wedding Date (2018)
(Wedding Date , book 1)
Jasmine Guillory
"What a charming, warm, sexy gem of a novel. I couldn't put The Wedding Date down. I love a good romance and this delivered from the first page to the last... One of the best books I've read in a while."

We Cast a Shadow (2019)
Maurice Carlos Ruffin
"Set in the post-post-racial South, We Cast a Shadow tells the story of a man--one of the few black men at his law firm--desperate to pay for his biracial son to undergo demelanization, desperate to 'fix' what he sees as his son's fatal flaw. It is this desperation that haunts this novel and, in this desperation, we see just how pernicious racism is, how irrevocably it can alter how a man sees the world, himself, and those he loves. It is a chilling, unforgettable cautionary tale, and one we should all read and heed."

So We Can Glow (2020)
Leesa Cross-Smith
"Leesa Cross-Smith is such a beguiling writer and her skills are on full display in So We Can Glow. These are stories about breathless love, lustful abandon, all that glitters, hot summers, cool pavement, sticky skin, beautifully beating hearts. There is such authenticity to these stories and nostalgia that is tempered with just enough of a clear-eyed understanding of the world as it is, not just how we hoped it might be. It's also refreshing to see a writer crafting stories that are so unapologetically for women, about women, a love letter to who we are, the best and worst of us, held high and true, so we can glow as brightly as we dare."

Thin Girls (2020)
Diana Clarke
"A stunning debut novel…gorgeously crafted…From one sentence to the next, Clarke leaves her readers splayed open, throbbing with the most beautiful, necessary ache. She writes with unyielding honesty and breathtaking tenderness. Thin Girls is a brutal, and unrelenting examination of what it means to be a woman in a body, wanting, needing, wanting, needing so much. With her assured, elegant prose Clarke makes you hope against all hopes that both Rose and Lily can find a way to satiate and save themselves and each other."

The Office of Historical Corrections (2020)
Danielle Evans
"With the seven brilliant stories in The Office of Historical Corrections, Danielle Evans demonstrates, once again, that she is the finest short story writer working today. These stories are sly and prescient, a nuanced reflection of the world we are living in, one where the rules are changing, and truth is mutable and resentments about nearly everything have breached the surface of what is socially acceptable. These stories are wickedly smart and haunting in what they say about the human condition… Her language is nimble, her sentences immensely pleasurable to read, and in every single story there is a breathtaking surprise, an unexpected turn, a moment that will leave you speechless, and wanting more."

Of Women and Salt (2021)
Gabriela Garcia
"Gabriela Garcia captures the lives of Cuban women in a world to which they refuse to surrender and she does so with precision and generosity and beauty."

Sorrowland (2021)
Rivers Solomon
"A fantastical, fierce reckoning ... Sorrowland is gorgeous, and the writing, the storytelling, are magnificent. This country has a dark history of what it's willing to do to black bodies, and Rivers Solomon lays that truth bare in a most unexpected, absolutely brilliant way."

Things We Lost to the Water (2021)
Eric Nguyen
"I was captivated. The writing is absolutely gorgeous . . . The voice is strong and this is a powerful novel . . . Well worth a read. Really enjoyed."

Dear Miss Metropolitan (2021)
Carolyn Ferrell
"Sometimes, to write about a horrifying trauma and its resounding effects, you have to write toward the heart of the matter in unexpected ways. Carolyn Ferrell does just that in her remarkable, challenging debut novel Dear Miss Metropolitan. This is the story of three girls stolen from their lives by a sadistic man, but it is also about a community that failed each of the girls and what it can be like to emerge from a very dark, damaged place on fragile footing. Dear Miss Metropolitan is a story told in brilliant, jagged fragments. It is a story that will make you uncomfortable and it will make you ache and make you rage. Ferrell's novel is a monumental provocation and heralds great things to come from an immensely talented writer."
Visitors to this page also looked at these authors
Lisa Gardner
W Michael Gear
Kathleen O'Neal Gear
Amitav Ghosh
Julie Garwood
Lee Child
Margaret George
Sarah Graves
Rick Gavin
Tess Gerritsen
J D Robb
Philippa Gregory
Richard Ford
James Patterson
Jon Scieszka
Clive Cussler