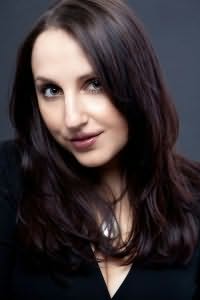 After serious pursuits of literature at Northwestern (BSJ) and Ohio State (MFA), Shari Goldhagen discovered she had a knack for sifting through celebrity trash and worked as a gossip writer for publications including The National Enquirer, Us Weekly, and Life & Style Weekly. Her articles on pop culture, travel and relationships have appeared everywhere from Cosmopolitan to Penthouse. She has received fellowships from Yaddo and MacDowell and currently lives in New York City with her husband and daughter.
Novels
Family and Other Accidents (2006)
In Some Other World, Maybe (2015)
100 Days of Cake (2016)

Based Upon Availability (2010)
Alix Strauss
"There's a story behind every room at Manhattan's famed Four Seasons Hotel, and in her engaging second novel Alix Strauss weaves them together in a dark and complicated tapestry. From the seemingly put-together manager to the aging rock star, every character has a secret and nothing is what it seems. You'll never look at anyone in a hotel quite the same way again."

Campaign Widows (2018)
Aimee Agresti
"Fun, dishy, and (yikes) all-too-real...Twenty-first century politics might be an unmitigated disaster, but I adored my time with this collection of vibrant, compelling characters. My vote is an enthusiastic 'yes' for Campaign Widows."

Lake City (2019)
Thomas Kohnstamm
"Kohnstamm knowingly illuminates the underbelly of Seattle - a place of beater cars, strip clubs, and a subpar hypermarket - far from the hipsters and gentrifiers. Hilarious as it is cutting, Lake City offers an all-too-insightful critique of clashing classes and misguided ideas of success."

You Would Have Told Me Not To (2020)
Christopher Coake
"You Would Have Told Me Not To is populated with people so real, I found myself smiling at their triumphs, laughing at their jokes, and wishing I could intervene when they inevitably screwed up. It's the type of book that stays with you long after you put it down."
Visitors to this page also looked at these authors
Jamie Freveletti
Jason Gurley
T Geronimo Johnson
Amelia Gray
Allegra Jordan
Stephen Jarvis
Hannah Gersen
Andrew M Greeley
Taylor Brown
Robin Kirman
Jonathan Galassi
Daniel Galera
Anna Hope
Hans Keilson
Douglas Glover
Benjamin Hale