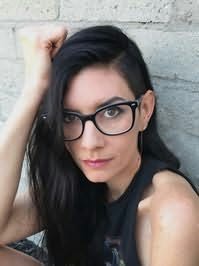 Wendy Heard was born in San Francisco and has lived most of her life in Los Angeles. When not writing, she can be found hiking the Griffith Park trails, taking the Metro and then questioning this decision, and haunting local bookstores.

Shadow's Keep (2018)
Meghan O'Flynn
"O'Flynn weaves elements of the procedural and the occult into a masterful psychological thriller replete with staggering, unpredictable twists. Readers should beware any notion that they can predict the ending of Shadow's Keep. Believe me, reader, you cannot."

Next Girl to Die (2019)
(Calderwood Cases, book 1)
Dea Poirier
"Next Girl to Die is a smart, fast-paced, and intensely well-written procedural thriller, and it takes place in one of the best settings I’ve had the pleasure of reading in a long time: a lonely island off the coast of Maine. The island has more secrets than residents, with each character more ominously suspicious than the last. Poirier is a diabolical plotter, and this tight debut is fraught with tension and mystery."

Foul Is Fair (2020)
(Foul Is Fair, book 1)
Hannah Capin
"Jade does what uncounted sexual assault survivors have dreamed of doing--she takes matters into her own hands. What ensues is part Buffalo Bill-style revenge fantasy, part diabolically well-planned manipulation, and it's all done in lyrical prose that feels dreamy and so much like Shakespeare. A gorgeous, scorchingly emotional novel perfect for fans of Mindy McGinnis' The Female of the Species or Courtney Summers' All the Rage."

All Your Twisted Secrets (2020)
Diana Urban
"With mystery layered on intrigue layered on suspense, Urban delivers a fast-paced, unforgettable escape room thriller?a gripping debut ... I can't wait to see what Urban has for us next."

Strike Me Down (2020)
Mindy Mejia
"Part procedural, part domestic, this thriller has something for everyone."

For the Best (2020)
Vanessa Lillie
"In this nail biter of a thriller, Lillie delivers an unconventional, unlikeable, but not unsympathetic protagonist who gets caught between a decades-old tragedy and a current day mystery. CEO Juliet finds herself in an impossible situation when her colleague is murdered, leaving her the prime suspect. What follows is a high-stakes unraveling, forcing Juliet to confront both her past and who she fears she’s becoming. Character-driven and heart wrenching, For the Best is a book to be devoured more than read."

I Hope You're Listening (2020)
Tom Ryan
"A heart-pounding YA mystery/thriller that is at turns chilling, poignant, and nail-bitingly suspenseful."

Reviving the Hawthorn Sisters (2020)
Emily Carpenter
"A historical murder mystery, lost memories, and priceless, hidden relics: Reviving the Hawthorn Sisters is an atmospheric, unputdownable Southern Gothic masterpiece. Carpenter’s masterful narrative bounces between young Ruth in 1930s Atlanta, her exciting escape from the mental institution that was her childhood home and prison, and her granddaughter searching for hidden truths after her death. This was a well-plotted mystery full of family secrets and Southern atmosphere, and I absolutely could not put it down."

They Never Learn (2020)
Layne Fargo
"A gorgeously-written ragestorm of a thriller. They Never Learn is a feminist powerhouse that will shock readers as much as it satisfies them."

The Lady Upstairs (2020)
Halley Sutton
"This diamond-blade feminist noir is near impossible to put down. Jo, the new queen of unlikeable female protagonists, exploits the wrongdoings of Los Angeles' sleaziest men in power while frantic to get out from underneath a mountain of debt to a woman--the Lady Upstairs--who threatens to crush her. A stunning new voice in LA Noir, Halley Sutton has set the bar high. I can't wait to see what she comes up with next."
Visitors to this page also looked at these authors
Julia Heaberlin
Elizabeth Haynes
Jennifer Hillier
Catherine Ryan Howard
Kay Hooper
Lisa Jewell
James Hayman
Peter Heller
Samantha Hayes
Emma Healey
Cate Holahan
Dot Hutchison
Joe Ide
Susan Hill
Anthony Horowitz
Tami Hoag