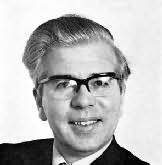 aka Michael Kirk, Robert MacLeod, Noah Webster
Bill Knox began his writing career as a young Glasgow journalist and was variously employed as crime reporter, motoring correspondent and news editor. He made many contributions to radio and television and was well known to Scottish viewers as the writer and presenter for twelve years of the Scottish Television police liaison programme, 'Crime Desk.' He wrote twenty-four Colin Thane and Moss books in all as well as many other crime novels. He died in March 1999.