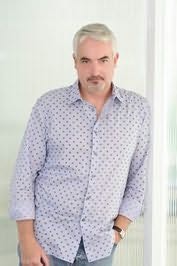 Martin has spent most of his adult life writing in one form or another. As a University researcher in history, he wrote pages of notes on reams of obscure topics. As a social worker with Vietnamese refugees, he wrote memoranda. And, as the creative director of an advertising agency, he has written print and press ads, tv commercials, short films and innumerable backs of cornflake packets and hotel websites.
He has spent 25 years of his life working outside the North of England. In London, Hong Kong, Taipei, Singapore, Bangkok and Shanghai, winning awards from Cannes, One Show, D&AD, New York and London Festivals, and the United Nations.
Whilst working in Shanghai, he loved walking through the old quarter of that amazing city, developing the idea behind a series of crime novels featuring Inspector Pyotr Danilov, set in 1920s and 30s.
When he's not writing, he splits his time between the UK and Asia, taking pleasure in playing with his daughter, practicing downhill ironing, single-handedly solving the problem of the French wine lake and wishing he were George Clooney.